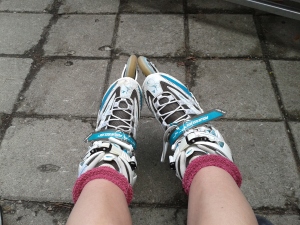 Why did I think this was a good idea?

They say riding a bike is a skill that, once learned, is never forgotten. However, having been at the mercy of Rigan cyclists after a 7-month winter hiatus, I think I disagree. If there is a non-wobbly Latvian cyclist out there, I have yet to see them. Of course, it probably doesn’t help that some Latvian women still insist on wearing 6-inch heels to claw at their pedals while careening straight at me.

This is one of the problematic side-effects of spring in this country. As soon as the snow melts, Latvians take to their wheels with gusto. Cyclists, rollerbladers and skateboarders all vie for space on the pavements of Riga, at the expense of innocent (terrified) pedestrians like me. However, in an effort to assimilate into the local population, this weekend I adopted an ‘if you can’t beat them, join them’ attitude. Feeling adventurous and figuring that eight wheels are better than two, I decided that I would try rollerblading for the first time in my life.

Armed with a Dutchman who’d been rollerblading before, my phone to call emergency services, and enough money to buy a couple of nerve-calming shots should it come to that, I boarded the 11 tram in the direction of Mežaparks (literally Forest Park). A student, called Janis, had told me that it was possible to rent rollerblades there.

We disembarked around 15 minutes later, only to be surrounded by happy parents, laughing children and gambolling pet dogs. I sent up a silent prayer that they wouldn’t all look like road-kill around an hour later.

The rental shop was located just inside the main gate, which was a shame as it gave me no time to back out of what was rapidly seeming like an exercise in madness. We paid up and were presented with our rollerblades. I slipped out of my flip-flops and into my ‘lucky afterthought’ pink woolly socks.

Having tried and failed miserably to do up my own rollerblades, the Dutchman sighed and did it for me. I then tried and failed miserably to stand up – twice. I pronounced sitting to be a much better idea than moving and settled into the bench. Maybe we should consider just doing that for the next hour? I found myself hauled to my feet and rolling towards the rack of rollerblades, unable to stop. Thankfully, I was moving at a speed of around 4 inches an hour so I managed to grab onto the rack and cling to it for dear life.

Can we go home now?

After finally being persuaded to let go, we got moving. But not very far as the tiles around the rental shop were full of cracks and holes so it was virtually impossible to roll. We eventually clunked out of that area and onto the open path. I feel like I have to apologise to anyone who went to Mežaparks yesterday for a nice quiet afternoon. All you could hear around the entire park was a petrified Irish woman breaking her heart laughing and exclaiming ‘WOOP’ every time I went a little off balance. Sort of like an Irish and less ‘sexy lady’ version of ‘Gangnam Style’.

I got the hang of it after a little while and was gaining in confidence until we came to our first hill. Going up was a bit torturous but I hadn’t really thought about what would happen when we got to the top. Unfortunately, what goes up must come down, so with a shriek that had birds taking to the skies and passers-by grabbing their children and dogs and diving for shelter amid the trees, off I went. With absolutely no control or plan whatsoever, and a Dutchman yelling at me to keep my wheels straight, I barrelled down the hill, waving my arms frantically and shouting at anyone unlucky enough to still be on the path to get out of the way – NOW!

I managed to avoid disaster and any more hills for the next forty minutes or so. We got into a rhythm and even saw people worse than me, which led to smugness and posing. 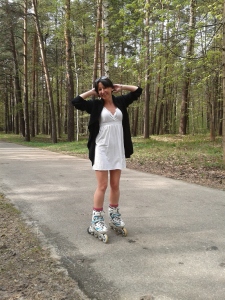 I even ventured off-road to enter the forest and see what Latvians think is so special about it. As I suspected, forests have a lot of trees. I plodded over to the first row of trees, had my photo taken to prove that I had entered a Latvian forest and then plodded back out again.

As the hour was nearly up, we made our way back to the rental shop with much yelling and WOOPing from me and much ‘KEEP YOUR WHEELS STRAIGHT!’ from him. Overwhelmingly relieved to be back in my flip-flops, we retired to the outdoor terrace of the bar next door for a well-deserved pint. Back in my natural habitat, I was able to indulge in a spot of people-watching – a welcome break from intensely staring at my feet and the path in front of me for the last hour. And god bless them, the Latvians didn’t let me down. Where else in the world would you be rewarded with a vision like this…

Out for a little stroll in the forest…

I’ll have to leave the woman attached to the dog to your imagination as I was afraid a denim suit with gold dragons and snakes would damage my lens.

And so, Linda’s day in the forest came to an end. Unbloodied, unbroken and full of ideas on how to dress a dog, should I ever buy one, I headed back to Riga, feeling a little more Latvian than I had a few hours earlier. Are forests and wheels the way of the future?

47 Responses to Squeals on wheels