Lovely weather and a Lovely Blog Award – does life get any better than this? A massive thank you to Alli at The Vintage Postcard for the nomination. I’m currently reliving my experiences in New Zealand through her fantastic writing and photography. If you haven’t checked out her blog yet, you should do so!

How to accept this award:

Instead of writing 7 things about myself, I thought I’d tweak the requirements a little and write about 7 things I did this weekend instead.

1. The weekend kicked off on Friday night with a little bar hop around my local area. Armed with the Dutchman (who has drunk more since meeting me than he had in his whole life up to that point), we started in the always lovely and civilised Vina Studija on Terbatas and Stabu. Managing to find a table – always an achievement any night of the week but especially on a Friday night – we shared a bottle of my new favourite New Zealand Sauvignon Blanc. From there it was off to the appropriately titled Se7en, where the French owner had promised us a ‘buy one, get one free’ deal on beer. Merci beaucoup monsieur! A couple of pints later, we reluctantly wriggled out of the most comfortable chairs in Riga and made for ‘Ar mani atkal runa kaijas’. Bumping into my Scottish friend on the way, we dragged him along for the ride. Latvian girls in trampy costumes were handing out free test-tubes of Jaegermeister and putting orange leis around people’s necks. My Scottish friend delighted in cheerfully announcing to anyone within a 5-mile radius, ‘Linda’s been leid!’ – funny guy.

2. With Latvia oddly being one of the hottest places in Europe at the moment, what better  way to spend my Saturday afternoon than with a trip to the beach? I spend so much time talking to and being nice to people during the week that at the weekends, I enjoy some silence and being nice to myself. Armed with my book, my bikini (rooted out from under all the woolly socks) and Factor 6 bronzing oil (the only remnant of last summer I could find), I boarded the train for Majori. 35 minutes of ‘I hope that odour isn’t me’ later, I disembarked and, after a short walk, felt the sand between my toes for the first time this year. 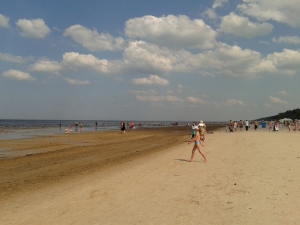 Known as a predominantly ‘Russian’ beach, this is one of the reasons I like it. As usual, I was one of the few people who hadn’t been to a manicurist, pedicurist, hair stylist, botox/collagen specialist and solarium. The others were probably foreigners as well. Watching sulky women in fancy dresses and enormous earrings manoeuvre their way along the beach in heels, tickles me in a way very few things do. The book wasn’t really necessary as there is no better place to people-watch than Majori on a sunny day. I remember when my friend came to visit last summer. Unusually quiet for a little while, she eventually whispered to me ‘Are they all prostitutes?’. Rookie mistake.

3. A few hours later, craving a nice cup of tea, I popped into a local cafe and also treated myself to the most expensive cake they had – at a whopping 1.30 lats.

Well worth the money

Unable to find a seat outside, I sat down inside to enjoy my cake and tea and read my book. When I read, I tend to become absorbed in my book and shut out whatever is happening around me. My mother has always said that there could be an elephant in the middle of the room and I wouldn’t notice it. So it was with some surprise that I looked up half an hour later and saw the cafe teeming with people. Feeling more crowded than curious, I stood up to leave and the reason for the sudden influx of people became apparent. Since I’d been inside, the sky had turned black and rain was now bouncing off the pavement. Thunder rumbled in the distance and lightning forked across the sky.

Nobody on the street, everybody in the cafe!

I made a dash for one of the mini-buses/death-on-wheels back to Riga. Standing room only until a kindly Russian lady offered me half her seat. спасибо my good woman! Unfortunately, this gave me the opportunity to survey the sand, gravel, leaves and twigs now stuck to my legs with the rain. After a vague attempt to clean myself off which resulted in accidentally flicking a soggy leaf at the girl opposite me, I gave up and focused on clinging to the seat with one butt cheek.

4. The 18th of May is Night of the Museums in Riga, when all the museums are open until the wee hours and free. Previous attempts to get involved in Night of the Museums have quickly turned into Night of the Bars as the queues for the museums are insanely long. People like free stuff. A lot. This year however, I had more success. Feeling very cultural, we started off in the Bourse Art Gallery, where there was a display of moving poetry. Next it was onto the Museum of Architecture where we examined high brow art, had some very serious arty discussions and did not laugh at all… 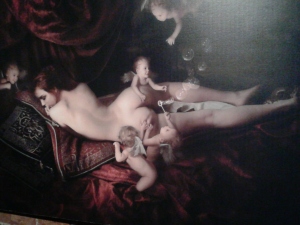 All of this was very thirsty work so we made a pitstop in Mojo cafe before heading to our final museum – the Museum of Decorative Arts and Design. This one was a real find as there was a photography exhibition of the faces of people living in the Latgale region of Latvia. For anyone who thinks I’m exaggerating about how miserable people look here, check out this kid and doubt no more. There was no explanation as to why she looked so miserable but I guess they don’t need one. 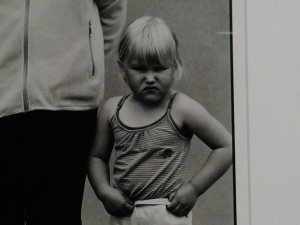 5. We reached an Irish bar just in time for the voting section of the Eurovision Song Contest. This would turn out to be a mistake, as watching Ireland sing their way into last place knocked me out of my cultural reverie. A couple of pints helped to dull the embarrassment somewhat though.

6. Today I realised my Latvian is getting better. Over breakfast this afternoon, I was watching an episode of Medium with subtitles. The subtitles are usually a little ahead of the action so I like to read them, predict what the characters are going to say and then give myself a little pat on the back when I’m right. This time though, I was just confused. The subtitles said ‘You were right. It was our son. It was murder.’ But the main character doesn’t have any sons, only three daughters. Then the speech kicked in. What he actually said was ‘You were right. It was ARson. It was murder.’ So it seems my Latvian (or at least my English) is better than some people working as translators here.

7. I finally wrote my 5-minute monologue for the Human Library next weekend (more here). Actually, it’s closer to 3.5 minutes but don’t tell anyone.

The Dutchman – he’s earned it

The always entertaining Lady of the Cakes

Hitch your wagon to a star

Congratulations to the nominees – I hope you all had a lovely weekend too and enjoy your ‘Lovely Blog Awards’!