Human Library (or Where are all the Latvians?)

On Saturday, I woke up with a vaguely uneasy feeling. It took me a few minutes of yawning, stretching and eye-rubbing before I remembered why. The day of the Human Library had finally arrived.

Since I’d decided to take part, my feelings had run the gamut from excitement to nervousness to downright terror. This last was prompted by a conversation with my boss a few weeks earlier.

Her: When are you leaving for England?

Her: And when is the Human Library?

Her: Ok. Just checking in case somebody decides to kidnap and torture you and we have to cancel your lessons.

Me: It’s good to be prepared.

However, as soon as I got out of bed, a new problem arose. What to wear? I had given the Latvians/Russians such a lambasting in the past. Was there anything I could wear that wouldn’t invite the same? Should I go Irish, or go Latvian in an attempt to blend in? In the end, I decided to go for ‘normal with a hint of Latvian’. Jeans, white top, smart jacket (normal) and black stilettos and red toenails (Latvian) to finish the look. I figured the stilettos could also double as a weapon if my boss proved to be some kind of psychic.

Of course my hair chose that day to do its fuzzy thing and a quick look out the window confirmed that the weather wasn’t going to cooperate either. Dull, overcast, windy and about to rain at any minute. Still, there was no way I could back out now so printing out my monologue at the last minute, I left for Galerija Riga, avoiding the temptation to have a nerve-calming glass of wine on the way out the door.

Arriving on the 7th floor, I saw that Oksana, the organiser, had done a nice job of making the space look pretty and inviting. 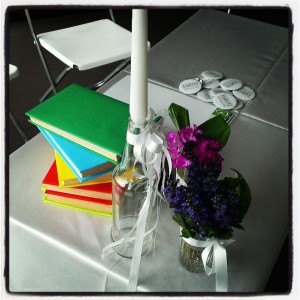 Everyone was introduced, badges were pinned to clothing and I changed my Irish walking shoes for my Latvian sky-scrapers. There we sat, a motley crew of ‘books’, waiting for the onslaught of chatty Latvians. ‘Blogger book’, ‘bisexual book’, ‘Greek-Catholic Ukrainian book’, ‘exotic book’, ‘street musician book’, ‘famous hip-hop artist book’, ‘Paralympian book’, ‘cook book’ and ‘blind book’ made small talk while we all waited.

At around 1.30, a tap on my shoulder from Oksana informed me that I had my first ‘reader’. Excited, I turned around only to see one of my students, a Russian Latvian, sitting waiting for me. (Let’s call him Sasha as most Russians, male or female, seem to be called Sasha.) To say I was surprised to see this guy was an understatement. Having explained during one of our lessons what the Human Library was about and when it was taking place, he seemed rather reluctant about attending, fearing that ‘the gays’ would try to ‘convert’ him…

Assuming that he’d had a change of heart, I sat down with a smile and we started talking. The reason for his ‘change of heart’ quickly became apparent. While I’d been talking about tolerance, open-mindedness and breaking down stereotypes, he’d heard ‘blah blah blah free English lesson’. 30 minutes of correcting his English later, my shoulder was tapped and with relief, I teetered over to meet my next ‘reader’. Sasha left without speaking to anyone else. 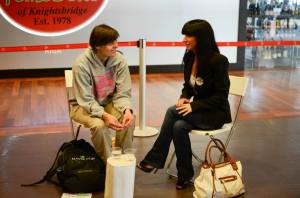 Check out the Latvian shoes…

A sweet, shy girl was waiting for me. She’d never read my blog but was curious about why an Irish girl was living in Latvia. She had a lot of questions which I did my best to answer and we had a very nice conversation, soon chatting and laughing like old friends. I later found out that she was the girlfriend of ‘bisexual book’ and they made a very cute couple. ‘Bisexual book’ had been given the choice by her parents of being ‘normal’ and being allowed to live at home or being bisexual and being booted out. She chose her girlfriend and has never looked back. I feel this is someone that Sasha could have benefitted from speaking to.

My next reader was one of the helpers, a lovely outgoing girl called Dace. She had read the blog as she’d wanted to find out as much as possible about all the books before the event. A well-travelled, well-educated, multi-lingual girl, she was able to see the truth in most of what I wrote about and found it very funny. It was a pleasure talking to her and we swapped stories and experiences for almost an hour. 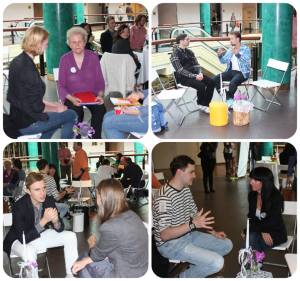 My final reader was a rather serious young man who had never read the blog either. Our conversation went something like this:

Him: It says on the information sheet that you think there are differences between Latvians and other nationalities. What are they?

Me: Have you travelled much yourself?

Him: I have visited ten countries in the last two years. What are the differences?

Me: Well, as you’re so well-travelled, maybe you’ve noticed some of them too. Like how Latvians in general are a miserable-looking lot.

Him: Mmm hmm. What else?

Me: Er, Latvians don’t use egg-cups.

Him: Mmm hmm. What else?

Me: They don’t do small talk. They have a too close relationship with leopard print. They are obsessed with walking in the forest.

Him: Mmm hmm. Thank you. Goodbye.

All too soon, it was 4pm and time to finish up. I was presented with a goodie bag by Oksana which contained L’Oreal Absolut Repair shampoo, hair masque and hair oil, Maybelline mascara and L’Oreal Nude Magique moisturiser. Thinking that maybe this was a hint and that my hair looked worse than I had previously thought, I was relieved to see that everyone else had received the same.

As the books walked to La Kanna to gorge on snacks and cake, I was left with a vaguely empty, flat feeling. Over the course of 3 hours, I had spoken to 4 people. In total, maybe 35 people had turned up and most of those seemed to be friends or partners of the people involved. As the population of Riga is 750,000, this seemed to be rather a poor showing in my book. My blog has received 6,676 views in Latvia alone, many of the viewers having quite strong opinions about it which they are not shy about sharing from the safety of their living rooms, under the cover of their usernames. Couldn’t even one of them have come out and told me what they think to my face? 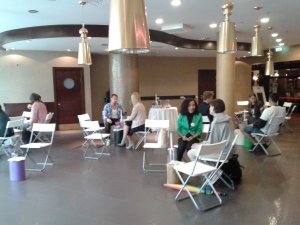 This was absolutely not a reflection on Oksana. She had promoted the event to within an inch of its life. Posters were placed all over Riga, daily (sometimes hourly) updates were added to social networking sites, and a great location with a lot of foot traffic was chosen. The helpers ran around the shopping centre for three hours, explaining to people what the Human Library was and that it was taking place upstairs. ‘Not interested’ was the response from most people they spoke to. Throw in the fact that a famous Latvian musician was one of the books and this is even more bizarre. It would roughly equate to Bono sitting in the Stephen’s Green Shopping Centre for three hours with not one Irish person bothering to speak to him.

So what’s the explanation? The other books seemed to think that Latvians are too shy and too socially-awkward to have a normal conversation with a stranger without a skinful of booze. I think there is some truth to this. I also believe that this social-ineptness is compounded by an innate lack of curiosity about or interest in other people and their lives, which seems to be a character trait in a lot of Latvian people.

In addition, I suppose an inherent flaw in the concept of the Human Library is that only open-minded, tolerant people attend. Ignorant, intolerant people either don’t realise that they are ignorant and intolerant or are perfectly happy to remain that way.

Whatever the reasons, I live to blog another day. There will be another Human Library and another chance to meet some really interesting people with some truly fascinating stories. Whether or not anyone wants to hear them is in the hands of the Latvian people. 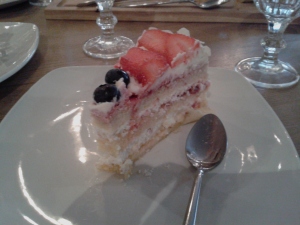 46 Responses to Human Library (or Where are all the Latvians?)