The happiest nation on earth

While half-watching BBC News this morning, my attention was suddenly drawn away from my boiled egg (in an egg cup) and towards the newsreader. She was about to announce which nation is the world’s happiest. You can imagine my surprise when it was revealed to be Australia, not Latvia.

OK, the survey only included OECD countries so Latvia wasn’t even included, but it did get me thinking. Would Latvians still be so miserable if they lived in Australia? I decided to do a little research and find out how we compare to the world’s happiest chappies.

The survey ranked more than 30 countries on criteria such as health, safety, income levels and housing. On my walk home from my morning lesson today, I decided to take a couple of quick shots, which I think sum up the Latvian attitude to health and safety.

If smoke alarms, fire blankets and extinguishers do exist in this country, I haven’t seen them. But helpfully, all doors do open outwards so if you detect the fire quickly enough yourself, you have a good chance of tripping over the step and onto the ‘safety’ of the crumbling pavement. You’re likely to be mown down by an errant cyclist at this point, but at least you’re still alive. Probably.

A quick internet search for employment facts and figures reveals that in Australia, over 73% of Australians aged between 15 and 64 have a paid job. However, the unemployment rate in Latvia, as of December 2012 is only 14.3%. But then, the average salary in Latvia is 413 lats per month so you have to wonder if it’s actually worth getting out of bed for at all. Here’s a random selection of jobs and salaries, just so you get an idea of what people here earn (in US$):

Beats me how everyone in Riga is walking around toting Gucci handbags and driving Bentleys and BMWs. But then, worldsalaries.org doesn’t publish figures for the ‘grey’ economy.

It’s probably unsurprising then that the suicide rate in Latvia is almost double that of Australia. But even if you don’t kill yourself, you’ll still end up ‘down under’ a good few years earlier than if you lived in the Land Down Under. Life expectancy for women in Australia is a ripe old 84 years, compared with 80 for men. In Latvia, women can expect to live to 78, while men pop their clogs at a relatively sprightly 69 years of age. But then, if you had this to look forward to, maybe you’d shuffle off your mortal coil a little early too. 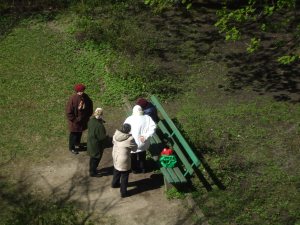 In fact, it’s amazing that women in Latvia cling to life as long as they do if this is the best they can hope for…

The good news is that you’ll probably be better taken care of dead than alive, as visiting graves seems to be more popular in Latvia than speaking to the living.

So even if Australia isn’t an option, at least there’s something to look forward to.

37 Responses to The happiest nation on earth