Finally, it was time to visit Ventas Rumba (Kuldīga Waterfall) and Vecais Tilts (Old Bridge), which if I’m honest, I’d been putting off a little for fear of being disappointed. At a tinchy 2 -3 metres high, it’s not going to rival Niagara Falls any time soon, but it does have the distinction of being Europe’s widest waterfall.

Following the signs, I ended up here.

Convinced that the guidebooks, the internet and everyone else had been taking the mick, I had to give myself a bit of a shake. Of course this couldn’t be it. I’d seen photos. Keep walking.

So I kept going, following the street around and was rewarded by this beautiful sight. 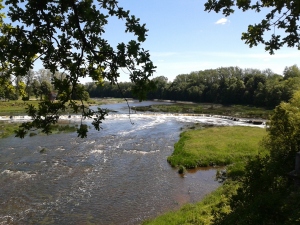 You can’t imagine the relief I felt. It was gorgeous, everything I’d imagined and more. Spanning 275m, Ventas Rumba is the reason Kuldīga has the strange moniker ‘the city where salmon fly’. Seemingly, during spawning season, the salmon swim upstream and attempt to hurdle the waterfall to bypass it. On this particular day though, there were no salmon, just a few locals and tourists having a quick dip.

Wanting to get closer, I turned and made for Vecais Tilts, one of the oldest cobblestone bridges in the world. But before I could get there, I had another ‘am I dreaming?’ moment as a real-life cowboy rode past. Was this place for real? 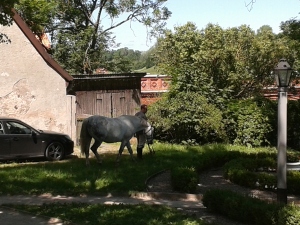 With the noble steed neighing behind me, I took my first steps across Vecais Tilts, admiring the bridge, the falls and the colourful wedding party in front of me in almost equal measure. 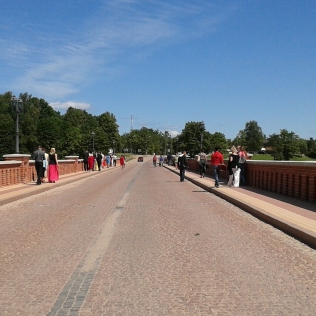 I reached the end of the bridge and started working my way towards the falls. At this stage, part of the wedding party (including the bride and groom) was ahead of me, with some guests straggling behind. As I cut through the long grass towards a tiny bridge over a creek, I tried to overtake them but even in trainers, I’m no match for a Latvian woman on rough terrain – even if she is wearing a gown and 6-inch heels.

When I got to the bridge, half of the party was already there but that was fine. Figuring we were all going in the same direction, I’d just have to trail behind a little. But no, they’d stopped on the bridge to do the ‘lock the padlock’ thing. I turned to go back but by now the rest of the wedding party had caught up, so I was sandwiched in the middle of all these happy wedding guests like the little Irish gatecrasher that I was.

Some people had started to notice the stranger in their midst and were sort of whispering and pointing at the awkward-looking weirdo in jeans and trainers. I meanwhile shuffled and shrugged and smiled, unable to explain in Latvian (or even in English at that particular moment) how I had accidentally worked my way into the happiest day of their lives.

Eventually, laughter rang out as they realised I was just a random tourist in the wrong place at the wrong time, and they moved to the side to let me pass. Unable to remember the Latvian for congratulations – good luck was the only phrase that came to mind, and I didn’t feel that was entirely appropriate – I squeaked ‘Congratulations!’ in English, with an idiot grin, and stumbled off the bridge.

I paused at the other side to watch the ritual, which I’d never seen in person before, and was lucky enough to take this shot. 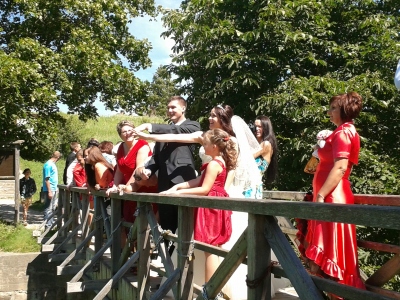 And now, a few more gratuitous shots of the waterfall and bridge before we move on.

The great thing about Ventas Rumba in comparison to say, Niagara Falls, is that it hasn’t been touristified to within an inch of its life. You don’t have to pay anything to go there, there are no stalls selling tat you don’t need, and the town hasn’t been turned into some sort of Frankenstein’s monster like Niagara. I know. I’ve been there. Oh, and you don’t have to wear a poncho to get close to Ventas Rumba. 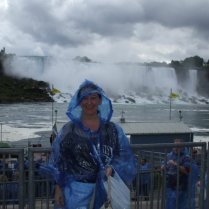 2008 – back when I could afford fancy holidays 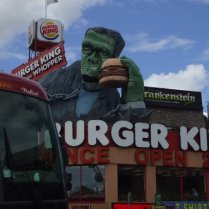 The viewing tower was a bit of a disappointment after that… 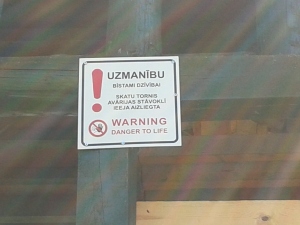 …as was the museum, which was closed for renovations. By now, my jeans were starting to chafe my inner thighs a little but, despite a little discomfort, this was actually good as it added to my cowgirl swagger. I headed back into Kuldīga through the town garden which was an oasis of calm. I just couldn’t understand why there weren’t more people there, but was also very glad that there weren’t.

Just me and the duck

I wandered into a local cafe and ordered a piece of ‘rausis’ the closest name I could find to ‘sklandu rausis’ but it was more of a rhubarb crumble than a Viking carrot cake. Not that I was complaining. The total for that and a cup of tea? 69 santimes. My jaw might have actually hit the counter as the girl said ‘Yeah, a lot of people think it’s cheap here.’ ‘Cheap? It’s madness!’ I replied. ‘Well, if you want, I can charge you double. Tourist prices, y’know.’ Unsure of whether she was joking or not, I decided to sit down and shut up. Although, even at twice the price, it would have been a bargain.

Bolstered by sugar, I worked up the nerve to ask her where the bathroom was.

‘We don’t have one. You can try the park.’ Surely this time she was joking? But no, this is Latvia.

Now I feel roughly the same way about park, bus and train toilets as Aboriginal people feel about photos. Every time I enter one, I feel like a little bit of my soul is being chipped away. But desperate times call for desperate measures so off I trotted. How bad could it be? 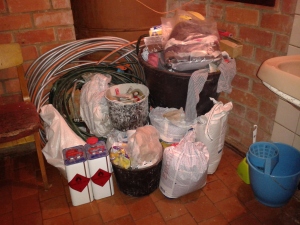 Aside from the fact that the public toilets were also the lost property, gardening tool shed, cleaning supplies closet and flammable liquid storage unit, the stall doors only went up to my chest so you could hover over the loo and still see, and be seen by, anybody unfortunate enough to walk in while you were doing your business. Thankfully, the luck of the Irish held firm and nobody did. I got out of there fast and tried to gorge myself on beauty again to wipe away any lingering toilet flashbacks. 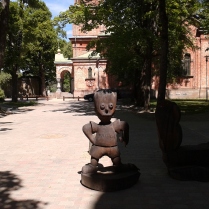 Finally, somebody found something interesting to do with all the wood in this country 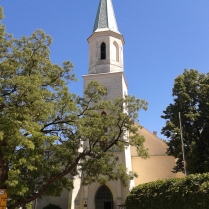 With my sightseeing done, it was time to check out a local watering hole. I forgave the friendly barmaid for having to put ice into my white wine to chill it. (See? A smile can go a long way!) Finding a sunny spot on the terrace, I proceeded to bake and jot down a few notes about my day in my nerd-notebook. A few of the local lads rocked up, one taking off his shoes before going into the bar. This was something I hadn’t seen before. 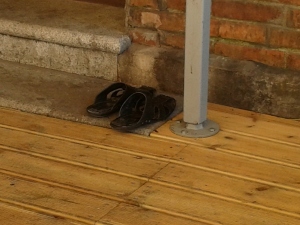 Make yourself at home!

A few minutes later, beers in hand, a couple of men came out, sort of chuckling and nudging each other the way men do when a woman they don’t know is present. ‘Good morning’, one said, to admiring guffaws from his mate. This was 5.30pm. Maybe they’d been drinking since the morning? ‘Writing, huh?’ Well, yes. Clearly. I guess they don’t see many people writing in public in tham thar parts. ‘Just like home’, I said, nodding at his shoes. Cue delighted schoolboy laughter and more elbowing. The weird thing is, I don’t think they realised I wasn’t Latvian throughout this exchange. They must have been drunker than I first thought.

Strangely pleased by this fact, I slugged back the rest of my wine and headed for the bus station. So, my conclusions on Kuldīga? I loved it. Sure it was a bit rough around the edges… 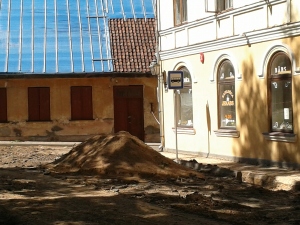 …but I think that just added to the character of the place and the feeling that you’d walked onto a (slightly unfinished) movie set. Was it worth the 7-hour return bus journey to spend less time than that there? Absolutely. Uz redzēšanos, Kuldīga!