For the weekend that was in it (Līgo), it seemed like a good idea to try and see a bit more of the Latvian countryside. And driving through it, not actually walking around in it, seemed an even better idea.

So, last week, myself and the Dutchman rented a car for Saturday and Sunday and made plans to get out of Riga for the weekend. My friend had very kindly offered us her apartment in Liepāja for Saturday so this would be our final destination on the first night. Apart from that, we had no real plans.

Unable to rent a car in central Riga, we had to go to the airport to pick it up. This would prove to be a rather confusing experience, as we made the rookie mistake of following the ‘Car Rentals’ signs. I really should have known better as any time you see a sign in Latvia, the trick is to go in the opposite direction. Still, eventually, we found the office and were directed to the P3 parking lot.

Me: Did she tell you which parking space it’s in?

DM: She said it’s kind of yellowish and a Ford Fiesta.

Thankfully, the lot wasn’t that big so after a little wandering around, we found it.

Upon seeing the licence plate, I decided that the car had to be christened immediately and Janis Gold was born. After the Dutchman had done the ‘typical man thing’ of walking around the car, running his finger over any dents and kicking the tyres, we were off, shouting ‘ROAD TRIP!!!’ out the windows every couple of minutes.

As we’d had a bit of a late start, we decided to stop in Tukums for a late breakfast/brunch. I’d previously only seen Tukums bus station so I thought it might be nice to see what else the town had to offer. Not much it seemed. In one cafe, we were offered slabs of chicken, pork and boiled potatoes (at 11am) and in another, we were offered cake. The latter seemed the better option but then I noticed a sign that said they did toasted sandwiches. Clearly, in a country that doesn’t do all-day breakfasts, and where brunch is as rare as a sober Latvian at Līgo, this was the best we were going to get.

I’d heard that there was a guy who made penis-shaped furniture somewhere on the outskirts of the town, but unfortunately, there was no mention of this in my guidebook. (You’d have thought this would be a major attraction, but no.) Unable to find him, we headed instead for Cinevilla – Latvia’s answer to Universal Studios – located around 12 kms outside the town. 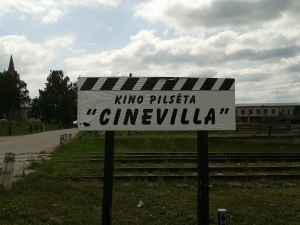 After following a dirt track for around 4 kms, we reached a sign that pointed down another dirt track. With a rather impressive dust cloud billowing behind us, we eventually rolled into the parking lot, with Janis Gold looking a little worse for wear. A few shifty-looking locals were wandering around the almost deserted parking lot, so with the ‘Deliverance’ Dueling Banjos music running through my head, we hurried over to the ticket office to pay in.

Freaking out the Dutchman by saying, ‘You got a real purty mouth, boy’ kept me entertained until we reached the best part of Cinevilla – trying on the movie costumes. Finding a little satin number fit for a Latvian princess, I slipped it on. I was mid-twirl when a gruff Latvian lady appeared behind me and proceeded to truss me up like a chicken, reminiscent of Mammy doing up the stays of Scarlett O’Hara’s corset. Wheezing slightly, we managed to take a few photos before I needed my smelling salts.

A lady’s gotta take care of herself

If you don’t like flashing, and prefer your head attached to your shoulders, getting out of your costume isn’t much fun. Gruff Latvian appeared again, yanked the costume dress (and my dress) up over my head and kept pulling until I was free. Waiting a few minutes until she was distracted by the other two visitors at Cinevilla, I quickly scrambled into another costume, took a photo, got out of it even faster, and ran before she could manhandle me again. 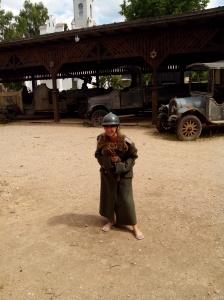 Despite a website promising that ‘the bravest visitors could explore the process of shooting a movie: climb over a gorge of fire, ride a bicycle at high speed, fly up to the clouds and dive to the depths’, none of this seemed to be available on the day we were there. Instead we found a peaceful little garden and enjoyed fighting off bugs there for a while.

Me ruining a perfectly good shot. The water was incredibly cold. 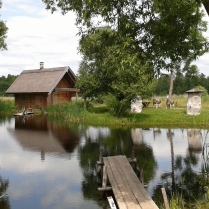 Feeling thirsty, we popped into the bar for a quick beer to cool down. In spite of looking very authentic and ‘ye olde’ from the outside, we were a bit disappointed to find that it looked like an American diner inside. 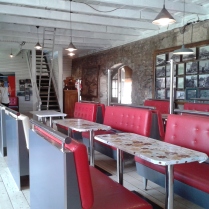 But at least it still had the obligatory Latvian pile of logs. After a quick mess around in the playground…

The effect beer has

…it was time to hop back into Janis ‘Dusty’ Gold and get back on the road.

20 Responses to Road Trip! (Part one)