We rolled into Liepāja later that evening, with the GPS announcing ‘You have reached your destination’, in the middle of a street that was most definitely not our destination. So we ignored it and kept driving, patting ourselves on the back when we found it sans technology – or rather found the street and the correct building.

The problem was that it was a huge block of flats and none of the doors had numbers on them. So, looking like criminals, we started at the first one and worked our way along, trying the key in all of the doors, smiling to reassure anybody who happened to pass by that we weren’t serial killers. No joy. Then we noticed a very faded number on the very last door and tried to count back however many doors would lead us to the number we were looking for. This also failed. Then we asked a random Russian dude.

We eventually found it, delighted to see that it had a little balcony – and that we’d arrived in time to buy wine. (Shops in Latvia stop selling alcohol at 10pm – apart from the shops that sell it 24-7. Welcome to the confusing world of Latvian laws…)

One bottle of wine and one sunset later, we hit the town, keen to see how the Liepājans (Lieputians?) celebrate pre-Līgo. By jogging, roller-blading and walking their dogs seemingly. At 11pm on a Saturday night. We found a bar close to the beach and marvelled at how it’s possible to have a bar full of Latvians – and zero atmosphere. However, there was a woman who’d clearly paid to have someone make her hair look as much like roadkill as possible, so between looking at her and fighting off mosquitoes, there was plenty of fun to be had.

The next morning, we were up (not very) bright and early, in search of Boulangerie, provider of the best brunch in town. Eventually finding it, tucked away in a side street behind the bustling market,we were told that there was no brunch that day. He’d just opened for a couple of hours to entertain himself until his Līgo party started. BUT, if we stayed for a coffee, he’d give us a recommendation on where to go afterwards.

Tea and coffee ordered, we climbed two flights of stairs to the roof terrace, pleased to find that it was just as lovely as my friend had said. 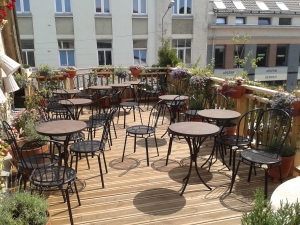 A very pleasant half-hour was spent here but upon descending, the owner cheerfully informed us that actually, nowhere else in town did brunch (and by the way, if we ever came back, we really should try his – it’s amazing). Feeling a little cheated and with our stomachs slowly eating themselves, we walked around until we finally managed to persuade somebody to make us a couple of omelettes.

Next, it was time to check out the beach in daylight. I made three discoveries here: 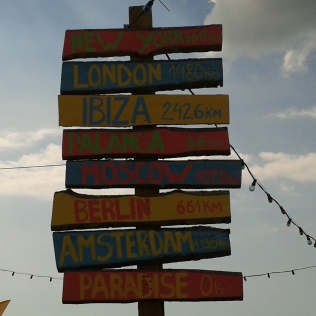 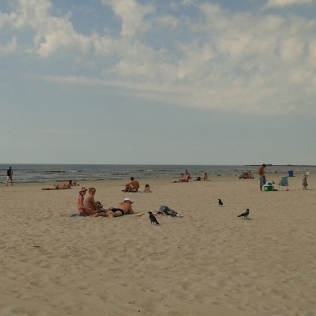 2. The Baltic Sea really is baltic. 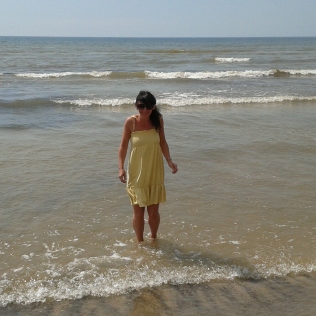 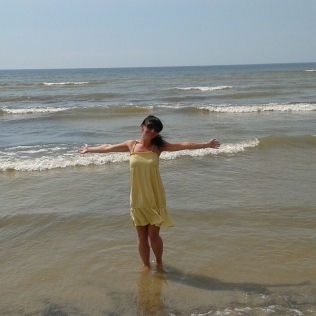 Putting on a brave face

3. I really need to buy some new shoes. 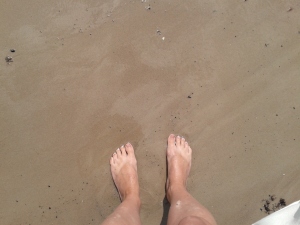 Oh, and you can also do this: 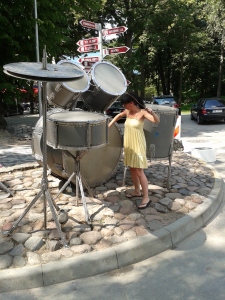 Luckily you can always find a couple of sticks in Latvia

After a lazy stroll around the centre and along the esplanade, we drove north, towards Pavilosta. Lonely Planet had promised beach bars and tiki huts (there were none) and a chilled out Californian surf vibe. I’m not sure about the California part, but there was a great beach and a great atmosphere. Possibly due to the fact that the entire population was crowded into the one and only cafe/bar in the village. 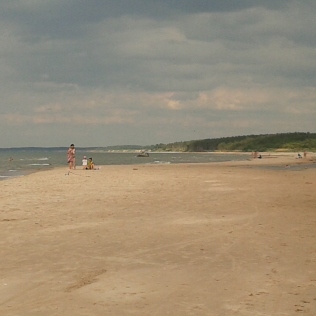 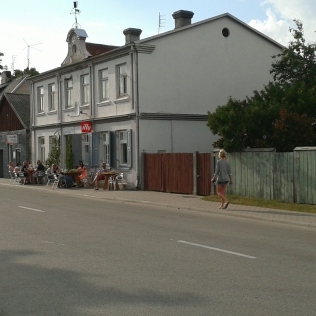 Just as we were approaching Riga, the skies opened, making it virtually impossible to see out the windshield. This is one of the advantages of having a calm, logical Dutchman around. While I was cowering in the passenger seat, he was driving and whistling. Yep, whistling.

Anyway, we made it back to Riga in one piece, although poor Janis Gold had aged around 20 years in two days. If anyone asks, it wasn’t us…