Now you see me, now you don’t

A couple of weeks ago, I was doing a lesson on verbs of the senses when the difference between ‘look at’ and ‘see’ came up. After a short explanation, in an attempt to clear up any confusion, I said:

“For example, I’m looking at Janis, but I can still see unJanis, Gunta and Ginta all the way over the other side of the room.”

Blank looks all round. A little pondering later, I decided that the problem wasn’t my (incredibly enlightening) explanation, it was that Latvians don’t see things the way other people do. Of course, I haven’t reached this conclusion lightly – I’ve got evidence to back it up.

Exhibit A: Latvians at a bus-stop

When Latvians are waiting for a bus, they tend not to look in the direction the bus will be coming from, but rather at the spot where the bus will arrive. When it does, they surge forward, en masse, in a painful parade of bony elbows, spiky stilettos and sharp-cornered shopping bags, without looking left or right to see if anyone else is walking along at the same time. I always consider it something of a miracle when I manage to escape without having any toes severed. I’m small but I know I’m not invisible so maybe there’s another explanation… 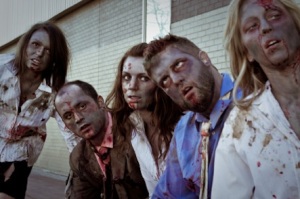 The best-kept secret in Latvia is out

Exhibit B: Latvians going to the shops

If I’m walking to a shop, I generally know where it is. 5 or 6 buildings away, I’ll gradually start moving to the side of the pavement the shop door is on, meaning that there is no sudden change in direction or need for sharp turns. Not so your average Latvian. They’ll walk along at the furthermost point from the shops, then turn at a 90-degree angle and make a bee-line for the door – naturally without looking left or right. It’s kind of like every destination is a surprise.

Be afraid, be very afraid. A Latvian exiting a parking lot is a dangerous thing. Most drivers will ease their cars onto the pavement, looking left and right to make sure they don’t squish any pedestrians. A Latvian, however, will shoot out of the parking lot straight onto the road at Formula One speeds, scattering men, women and children like skittles.

Thanks to the Latvian inability to look or see, a relaxing stroll around beautiful Riga is virtually impossible. If you’re not keeping your eyes peeled for the crater-sized holes in the pavement, you’re busy side-stepping Latvians on heels or wheels, who seem determined to topple anyone who dares to share their footpaths.

I would sentence the entire population to mandatory eye-testing, but in a country where perfect vision is classified as ‘zero vision’, I’m not sure it would help much.

29 Responses to Now you see me, now you don’t