Beer and Slothing in Palanga

Sadly, my time in Palanga is coming to an end. I’ve had a wonderful few days here, so as most people (outside the Baltics or Russia) wouldn’t normally think of Lithuania as a sun holiday destination, I thought I’d do my bit to promote it here, with a sort of rough guide based on my experiences.

First of all, a quick note on polite language. The Lithuanian for ‘thank you’ is ‘ačiū’, pronounced ‘ah-choo’, just like an English sneeze. So if you walk around like you’re allergic to everything, you’ll be golden.

I’m staying in a big house, owned by a nice (non-English-speaking) middle-aged couple. I have my own room but share bathroom and kitchen facilities with two other rooms. This is not as torturous as it sounds, and even comes with a few perks like free food delivered to your bedroom door.

On my first morning here, obviously sensing my hungover, pathetic state from downstairs, the lady of the house knocked on my door, shoved a bowl of chicken broth into my hands with a ‘maybe you like soup’ and closed the door again. Ah-choo! I like soup very much – even more so when it comes with no conversation.

But away from the house, and down to the beach, where the temperature is a balmy 27 degrees. You’ll probably spend most of your days here, as I did, turning over every hour or so, to ensure even baking.

Be warned that tourists here start drinking rather early in the day. Two cans for your morning stroll to the beach (then a case of beer for when you get there) should see you right. However, try to pace yourself so you don’t end up like this guy…

Seems the coke was too little, too late

Also, if you’re a woman with iffy self-esteem, Palanga Beach might not be the place for you. Every time you raise your head, a long-haired, long-legged vision of Lithuanian loveliness is sashaying past, in little more than coloured dental floss. (Luckily, I’m fabulous so I was OK…)

Perhaps more surprising than the never-ending parade of beautiful women, is the fact that the men here are so un-lecherous. I’m fairly certain that if any of these living dolls made an appearance on an English beach, they’d be up to their perfect knees in slobber. Here, the men seem pretty nonplussed. I guess the difference is that in Lithuania, they’re a dime a dozen. In England, the men are so used to fattie-fondling, that it must seem like these women have fallen straight from heaven.

Another theory of mine as to the dismissive attitude of the men here is that, once bagged, the ladies seem to get a little whiny. I’m no expert in Lithuanian, but to me, a typical conversation/monologue between a girl and her boyfriend sounds a bit like ‘whine, whinge, moan, complain, whinge, whinge (pout)’.

But, as previously stated, I can’t understand a word of the language so I guess they could be saying ‘Oh honey, I’m having such a wonderful time. Now let’s get you back to the room, and out of those ball-clenching Speedos, so we can make sweet, sweet love.’

The nice thing about the women here is that once they reach middle-age, they have the good grace to put on a few pounds. When I say ‘a few pounds’, I mean that they’re more likely to be harpooned than hit on, so at least, the rest of us mere mortals can take some small comfort in that.

What a difference a decade (or two) makes…

Almost as exciting as the people-watching, is the adventure of eating on one of the many terraces during the day. It seems that every wasp in the known universe migrates to Lithuania for the summer. Be careful when picking up a sugar dispenser as they tend to congregate in the spouts – a wasp (or ten) plopping into your cup of tea is not a good start to the day. Somewhat miraculously, I’ve managed to escape with just one sting. (My right ankle is now the size of my thigh, which is a little worrying…)

But night-time is when Palanga really comes to life. The bar scene ranges from cabaret-style one-man-bands (with obligatory Dad-at-a-wedding dancing) to rather sad-looking topless girls gyrating on bars. From what I’ve seen, pretty much anything goes. Have a go in a bumper car, get your picture taken with a parrot, try your luck with arm-wrestling a few hairy Russians, or get your assets out on any available surface. Fun for all the family. And a beer will only set you back between €1.25 and €2…

Pull up to my bumper, baby…

They tried to get me up there with them… 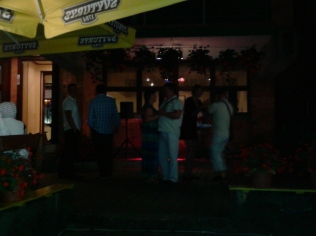 This is more my speed

Notice the special arm-wrestling cushions – this place caters for everything

Most of the tourists here are Lithuanian, Russian or Russian Lithuanian (here we go again), so the chances of inane Brit-ramblings are fairly slim. On my first night here, I struck gold when I caught the eye of some gentlemen at the next table.

Gent: Your ring is cheap. Mine is very expensive. (Flashing a rock the size of Ayers Rock)

Me: How very classy of you to point that out.

As I’m a sucker for rude people, I got chatting to them. When I asked them what they did, they told me they were Lithuanian gangsters. One of them had done time for extortion, then spent some time in Dundalk. (I’m not sure which is worse.)

Me: Who did you extort?

Gangsta: People who deserved it.

As a favour to any guys out there thinking of visiting Lithuania, I’m going to give you a brief run-down on how to fit in with the locals.

Figuring that these would be the guys to ask about horses’ heads, I decided to ask them what they thought of Latvians.

‘They are our brothers.’

So there you have it.

Before I finish, a word or two on the toilet situation is probably in order. (I know, more toilets…) As a lady, I would recommend that you bring a packet of tissues with you wherever you go, as refilling toilet roll dispensers doesn’t seem to be high on anyone’s list of priorities. Also, you might want to prepare yourself for the hovering horror that is the squat toilet in bus and rail stations – great for those thigh muscles though. 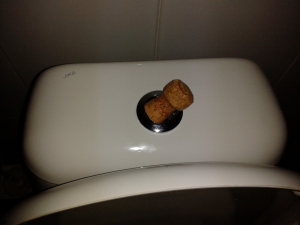 If the flusher breaks, don’t worry – just use a champagne cork instead!

So that’s it from Palanga. I’m heading out for dinner and a few drinks. (Hopefully I won’t run into the Lithuanian gangsters again after posting this, but they didn’t strike me as big readers…)

73 Responses to Beer and Slothing in Palanga