As some of you may know, I’ve been feeling a little under the weather for the last few weeks. However, sturdy Irish woman that I am, I don’t believe in troubling doctors over minor things like coughs or colds. I wait until something semi-serious happens before I decide to make an appointment. For example, bleeding out of my eyes would probably qualify as worthy.

This time though, my approach to medicine (‘powering through’ and wine), didn’t seem to be helping much. I finally gave in, called the surgery on Monday, and got an appointment for 10am on Tuesday. I finished my 8.30 lesson and headed over to the doctor’s, thinking that I’d be in and out in twenty minutes tops, leaving me with plenty of time for a cup of tea and a cake before the next lesson.

When the doctor asked me what was wrong, I told her that I’d had ‘a bit of a’ cough and a cold for the last couple of weeks and that they didn’t seem to be going away. She asked me if I had a fever and I actually touched my forehead before answering ‘no’. (I turn a tad mentally-challenged in the presence of doctors.) She then wanted to know if my cough was ‘productive’. It certainly wasn’t doing much for my productivity but yes, it was merrily producing away, like a little internal phlegm-manufacturing plant.

Cue lots of dress-yanking and heavy breathing – which wasn’t nearly as sexy as it sounds – and some stethoscope action. She announced that I had bronchitis. (OK, that doesn’t sound too bad – give me a prescription and I’ll be on my way.) BUT (uh oh) my right lung was making some weird sounds (thank god my liver can’t make noise) and she was concerned that I might have the beginnings of pneumonia…

Um, what?? Isn’t pneumonia SERIOUS? How could a person with pneumonia be this, well, upright? Surely, if I had pneumonia, I’d be lying in bed with a hot Jānis mopping my feverish brow and maybe feeding me grapes (in original or liquid form)? She told me I had to go for a lung X-ray. The results would be sent to her and she would call me the next day if there was bad news.

Kissing my tea, cake and next lesson goodbye, I trotted across the street to the ‘Medicīnas sabiedrība ARS’ or ARS Medical Centre. (Yes, it really is pronounced ‘arse’ and yes, as I’m so mature, I normally I giggle every time I walk past it.) But for the first time in 3 years, I wasn’t laughing.

Assaulted by the smell of sick people and bleach, I took my seat in the radiology unit. I ARSed around on my phone until I was called around ten minutes later. My hopes of meeting a hot doctor (called Jānis), were quickly dashed as I was briskly ushered into a room by a severe-looking mountain of a woman, possibly called ‘Gundega the Terrible’.

GTT: “Do you speak Latvian?”

GTT: (brandishing a piece of paper) “Sign no pregnant.”

I scrawled a signature.

As I previously mentioned, I was wearing a dress so the whole she-bang would have to come off. I waited to be handed some sort of robe, but GTT had already stalked off. So I self-consciously padded over to the X-ray machine, topless in my tights and boots – not a good look, in case you were wondering.

She pointed at where I should stand and I quickly obeyed. A hard shove in the back sent me flying – boobs-first – into the screen. Jesus, if I hadn’t been ill coming in here, I probably would be by the time I left. First X-ray done, I had to turn so my right side was facing the screen and put my arms over my head. Clearly I didn’t do it to GTT’s liking as she manhandled me into a more painful position. It was all over in around 5 minutes and I quickly scrambled back into my dress and left little trails of fire behind me in my haste to get out of there.

I stopped by the chemist’s on the way out and picked up my THREE prescriptions. A text from my cancelled student advised me to drink honey and lemon but to be honest, a lemon that isn’t floating on top of a hot whiskey just feels wrong, so I had a cup of tea and a lemon meringue pie instead.

The rest of the day was spent in a muddle of how to fit all the bloody drugs into a full working schedule. One to be taken twice a day, another to be halved and also taken twice a day – but with ‘distance’ between them both. An inhaler to be puffed on twice four times a day, ideally at 4-hour intervals. Honestly, there just aren’t enough hours in the day for this sickness business. 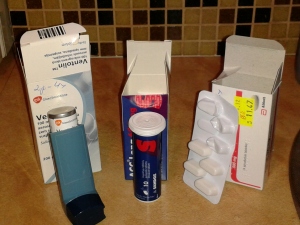 Today was business as usual, apart from waiting for the dreaded phone call. I figured she’d probably call early to put me out of my misery if there was any news. 10 o’clock came and went, 11 o’clock, 12 o’clock… I was in the clear! I got an email at around 4.30 (uh oh) which said that the X-ray had shown no sign of pneumonia. I wheezed a sigh of relief.

For the next two or three days, if the drugs do what they’re supposed to, it’s going to be a total phlegm-fest as all the crap ejects itself from my body. I guess it serves me right for being so damn sexy the rest of the time…

In a weird way, I’m actually quite looking forward to this as it means that I can finally contribute a couple of Irish snot rockets to the mean streets of Riga.