Since our first meeting, Yummy Jānis and I have been restricted to getting to know each other better via Facebook as he lives in Jelgava (of all places). It’s been an eye-opening experience. For example, I recently discovered that Yummy is quite into gangsta rap when he sent me this clip:

Me: Is he saying “Back the fuck up motherfucker, Beyoncé’s here?”

Yummy: Oh my god, it’s like you just spat into my gangsta soul.

Me: So he’s not saying “Back up motherfucker, Beyoncé’s here?”

Yummy: Why on earth would he be saying that?

Me: Well, y’know, I thought that maybe he wanted other people (motherfuckers) to show some respect as there was a lady present. And was willing to shoot them if they didn’t.

Yummy: Hmm. You really don’t get gangsta rap, do you?

Amazingly, my profound stupidity (or potential hardness of hearing) didn’t scare him off. Neither did the pressure of being my latest blog star.

Me: Are you sure it’s not too much pressure?

Yummy: Don’t worry about my feelings. I can always slow poison you if it gets too much…

With this in mind, I accepted his offer to come over and cook me dinner. He showed up at around 7 last night, after 4 million phone calls and a rejection of the meat in Rimi for being “too ugly”. I had “Back the fuck up motherfucker, Beyoncé’s here” playing as he walked in to make him feel at home – a little gangsta’s paradise, if you will.

Like a cute Latvian magician, he produced a flower from somewhere. This was unfortunate as I was then forced to reveal that I’m not the most girly of girls and didn’t even own a vase. I had hoped to hide this fact until much later. Still, it looked OK in a Bulmers glass… 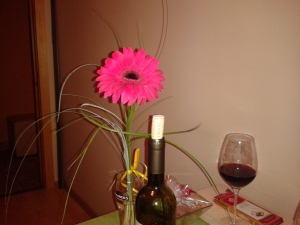 After a (very short) guided tour of my flat, I installed him in the kitchen where he proceeded to pull more food out of his backpack than my place has ever seen. I still had no idea what he was cooking as he had wanted to surprise me.

I poured us a couple of glasses of wine while he got organised. The wine had been my one responsibility (at my insistence), which he found kind of odd as this is considered ‘the man’s duty’ in Latvia. Finally, it was time for the big reveal – he was making… an Irish dinner! Beef and Guinness stew with champ, and goody for dessert, to remind me of home. (How perfect is this guy?) 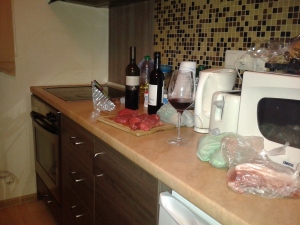 As this feast was going to take the guts of 3 hours to prepare, he’d even brought some sandwiches to keep us going in the meantime. (Seriously, how perfect…?) While he worked, I had to pinch myself a couple of times to make sure I wasn’t dreaming. Generally, there are only 2 circumstances in which you’ll find a man in a kitchen in Latvia:

1. He’s Latvian and rooting around in the fridge looking for beer.

2. A Latvian woman has married a foreigner who doesn’t think that cooking is ‘woman’s work’.

He even uttered the magic words:

Me: Do you want any help?

Yummy: No. You just sit there and look beautiful.

I quickly realised after my ‘vase fail’, that there were to be a few more ‘fails’ on the cards.

Yummy: Do you have a sharper knife?

Yummy: Or a knife sharpener?

Yummy: Do you seriously only have 2 pots?

Me: Why would anyone need more than 2 pots?

Yummy: Do you have something I can use to crush the garlic?

However, in spite of the limitations of my kitchen, he managed to cook up an amazing meal – which was lucky as it was almost 11pm by the time it was ready and I could have quite easily eaten him at that stage.

My photography skills don’t really do it justice…

So it seems that I have finally found the perfect Latvian man. It only took the best part of four years, 100+ blog posts and a little notoriety. I think I might suggest that Jelgava add him to their list of tourist attractions. It’s not like there’s much else to see there and I’m pretty sure women would flock from all over the Baltics to meet him.

On second thoughts, maybe not. I might keep this one for myself…

127 Responses to Jānis gets Yummier