My knickers have got me in a twist

During the week, I did some washing. I loaded the washing machine as usual (or so I thought), closed the lid and switched it on. Around half an hour later, I was being treated to a drum’n’bass concert in my living room. Oops, had I accidentally thrown in a belt or a shoe? It seemed unlikely, but then what was that godawful noise??

At the end of the cycle, I approached the washing machine with no small amount of trepidation. Nothing could have prepared me for the sight that greeted me when I opened the lid. I’d heard of knickers getting people in trouble before – y’know, like when they’re found somewhere they shouldn’t be, or when a knicker-sniffer gets his hands on a pair.

What I didn’t realise is that knickers could literally explode. Thread and bits of fabric were strewn all over inside of the washing machine – they hung from the powder holder and the inside of the lid like evil black strands of licorice. Noticing one particularly large clump of fabric clinging wetly to the outside of the drum, I reached down and pulled out my efficiently-shredded pants.

Of course, I now realised what must have happened. A rogue pair of knickers had missed the drum and gone down the side while I was loading the machine. All of the other clothes were now covered in rather artistic little black circles. Only the clothes that had been black to begin with were salvageable. Damn you, rogue knickers.

I cleaned off all the black gunge as well as I could, closed the lid and cut my losses.

Fast forward to today. I was having a nice relaxing time – I’d just got back from the park, where I’d gone to sit and read my book in the sunshine for a while. I decided, perhaps naively, to put on an experimental load of washing. I chose a few bits and pieces that I could live without and pushed the power button. Everything sounded normal, so I breathed a sigh of relief and adjourned to my sofa to get some work done.

At around 6.30, I noticed the water flowing from under the bathroom door and into the hallway. Shit, shit, shit! I opened the door to see that the bath mat was languidly floating around the room. It was at this point that I cursed myself for not getting around to buying a mop and bucket sooner. I threw on a pair of shoes that were now surfing around the hallway, and ran out to Drogas which, thankfully, is open until 7pm on Sundays, even Easter Sunday.

This involved walking past the nearest bar, where all of the local drunk Russians have now taken to sitting in the road drinking as the weather is better. (As it’s a long weekend, the Latvians have fled the city and gone back to the forests, presumably to dance around some trees, or whatever it is they do there.) One of them leered at me and said something in Russian. I gave him the Latvian Death Stare and trotted on.

The car has been replaced by rickety stools with rickety Russians on them.

His ardour was dampened considerably when Mrs Mop came charging back up the street a few minutes later.

I proceeded to mop and wring furiously, mop and wring, mop and wring. Water was still freely flowing into the hallway. I looked like a total sex goddess with my jeans rolled up to my knees, sloshing about in the ever-rising water in my bare feet. One hour and one full bucket later, things were pretty much under control.

I’m now the proud owner of a mop and bucket.

If you look closely, you can see a bit of knicker.

I tip-toed over to the washing machine, pulled the lid up, and tried to open the drum. To add insult to injury, the damn thing kept shocking me. With my jeans still around my knees, I pulled my sleeves over my hands, and managed to pop it open. 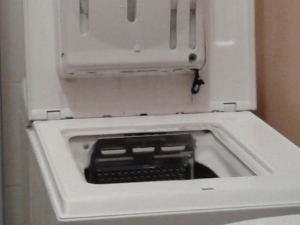 So now I sit, with icy feet, a slick floor, a bloody thumb (not sure how that happened), scared of my own washing machine.

Happy Easter to me.

121 Responses to My knickers have got me in a twist