The Irish Mammy versus The Latvian ‘Mamma’

Today is Mother’s Day in Latvia and it’s got me thinking about the differences between Irish and Latvian mothers. Naturally, it’s a bit generalised but feel free to get offended anyway.

To an Irish mammy, two things are of the utmost importance – that you’ve eaten enough and that you’re warm enough. From what I’ve seen, the priorities of the Latvian māte are a little different. (There’s no point in comparing fathers as Latvian men never get a say in anything.)

IM: You’re going out like that? You’ll catch your death!

LM: You’re going out like that? Maybe you should take off a layer or two. How do you expect to catch a man looking like that?

LM: Who’s your friend? She’s very pretty. I hope she won’t be too much competition.

IM: Who’s your friend? He’s very good-looking. (I wonder if she fancies him?)

LM: Who’s your friend? He’s very good-looking. (I wonder if he fancies me?)

IM: Have you decided what you want to do at university yet?

LM: Why haven’t you started reproducing yet?

IM: Go on, have another biscuit. A bird never flew on one wing.

LM: You’re having another biscuit? Do you think men like fat girls?

LM: She has three children by three different men. You could learn something from her.

IM: Don’t cry, love. There are plenty more fish in the sea. It’s his loss.

LM: Don’t cry. It’s not over until you play the fake pregnancy card. 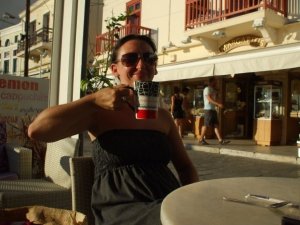 So there you have it.

(And mam, if you’re reading this, yes, I’ve just eaten and I am warm enough.)

Adjusting to life in Germany, after living in Latvia for four years. Should be easy, right?
View all posts by BerLinda →
This entry was posted in Humor, Humour, Latvia, Latvian women, Love and Relationships and tagged Irish mothers, Latvian mothers, Mantrap, Marriage, Mother's Day, Pregnancy, tea. Bookmark the permalink.

304 Responses to The Irish Mammy versus The Latvian ‘Mamma’