Pinning down my ‘process’

When the inspirational Nancy over at My Years of Sweat asked me if I wanted to continue a blog hop focused on the writing process, my initial reaction was a resounding no. I’d never really given any thought to my process beyond pouring a glass of wine, pouring said wine into me, and subsequently pouring my heart out. I’m not even sure that I think of myself as a ‘writer’. But as is her way, she somehow managed to talk me into it. Hopefully, I won’t let her, the blog hop or myself down by continuing the chain! 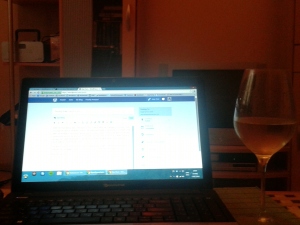 The idea is that you thank the person who nominated you, answer three questions and then nominate the next blogger. So, thank you Nancy – I think! And here goes:

What am I working on?

Right now, I guess I’m working on how to transition from Expat Eye on Latvia to Expat Eye on Germany, without losing too many readers along the way. Writing EEOL has been a total revelation and great fun – apart from when half the country wanted to kill me – so it’s going to be hard to say goodbye to it.

I’ve also been toying with the idea of writing a book for some time now, but the fact that I haven’t actually started doesn’t bode well. It’s tricky as I’ve written most of what I want to write in the blog, and I’m struggling to come up with an ‘angle’ that makes the book different from what I’ve done here. I’m not interested in just regurgitating blog posts – there has to be something that sets the book apart. And that’s where I’m at a loss. If anyone has any ideas, I’m listening!

How does my work differ from others in its genre?

When I began writing about Latvia, I was probably one of the first foreigners to do so though, in the last year or so, a number of people have started their own blogs on living here. I guess what sets mine apart is that I’ve never pandered to anyone. On occasion I’ve been told, “you’re a guest here – you should only write positive things about your host country”. But the way I see it, I’m a paying guest and I should be able to write whatever the hell I like.

My blog is unapologetic, it’s honest, it’s (hopefully) funny, and it engages people more than many other blogs of its ilk out there. Sure, it’s a bit exaggerated at times, but there’s a kernel of truth in every post and that’s what people like (or hate) about it. It starts discussions; it gets people thinking – but then, I guess some people don’t like that much. But, as the blog has just passed the quarter of a million hits mark, I must be doing something right.

Why do I write what I do?

I write what I do because it keeps me (relatively) sane. When I first started the blog, I’d been living here for almost two and a half years, so I’d built up a bank of impressions and observations. Ideas for posts are triggered in different ways – it could be something I see or hear, something I read, or something that infuriates me beyond belief. I try to post twice a week, so whatever nugget it is has a few days to flesh itself out in my head.

Most of the posts are writing themselves in my head as I walk around the city, so by the time I put finger to keyboard, they’re almost finished. Sometimes a line or a thought will pop into my head that has me laughing out loud as I’m wandering around – that’s when I know it’s probably a blog post. If it can make me laugh, it can probably do the same for other people – even if I do look like a crazy person when it happens.

The hardest parts of any post are coming up with a witty title, the opening paragraph and the closing paragraph. And of course, trying to maintain a level of consistency when it comes to quality and not just publishing posts for the sake of publishing them.

The level of interaction I have with my readers has kept me going through some pretty hairy times here. Half the time, the comment thread is more entertaining than the post itself, but that’s what makes it fun.

So, I guess that’s about it. I’m not really sure that counts as a ‘writing process’ but that’s all I’ve got!

For the final part of the blog hop challenge, I pass the baton to the intimidatingly multi-lingual Lady of the Cakes. She’s been following me since the very beginning and her blog is fantastically entertaining – when she’s not posting pictures of bloody flowers or lanterns, that is. I think we have a similar mindset so I’m interested to see what her ‘process’ is!

Thanks again to Nancy and good luck to Lady – her post will go up on the 21st of July so make sure you check it out! I’m off to get a refill – all of this reflection is thirsty work.

Adjusting to life in Germany, after living in Latvia for four years. Should be easy, right?
View all posts by BerLinda →
This entry was posted in Humour, Latvia and tagged blog hop, Blogging, Wine, writing process. Bookmark the permalink.

116 Responses to Pinning down my ‘process’