It drives me crazy

Walking around Riga can sometimes feel a bit like being an extra in ‘Night of the Living Dead’. Nobody seems to be aware of their surroundings or any of the other people around them – sometimes I wonder how anyone actually makes it anywhere with all the bumping into people that goes on. But much as I’ve lamented this, it’s really just a mild irritation.

The real problems start when you take these zombies and put them in a hunk of metal, moving at speed – usually with a mobile phone in their hand. Seemingly zombies text too. You see, Latvians drive the same way they walk – like they’re the most important people in the world and nobody else matters.

Speeding, dangerous overtaking, drink-driving, mobile phone use, reversing up one-way streets, illegal u-turns, parking wherever takes their fancy, speeding up when the traffic lights turn amber, breaking red lights, shooting out of car parks without looking left or right, stopping on pedestrian crossings, continuing to nudge forward across pedestrian crossings when pedestrians have right of way – the list of, at best, uncool, and at worst, deadly behaviour is never-ending. I’ve actually seen two cars crash into each other when there were no other cars on the road at all. (Seemingly, Latvia called in a French expert to fix their ‘traffic problems’ a few years ago. He observed, had a bit of a chuckle and went home again.) 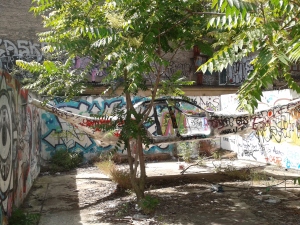 The Germans make wrapping a car around a tree look good.

I’m not the only one who’s noticed either. The Englishman in Latvia recently published a post on how he thought Latvian driving was the worst he’d ever seen. (Yeah, his honeymoon period didn’t last long.) Naturally, I couldn’t resist adding my two cents’ worth in the comments. And naturally, I was accused of exaggerating. Another girl said that while Latvian drivers weren’t the best (you think?), nothing could compare with how they drive in Russia, and, in particular, in Moscow.

Um, I’m sorry, but why are we comparing Latvians with Russians? Isn’t Latvia European? Isn’t everyone always whining about how Latvia is in Northern Europe? Shouldn’t we be comparing Latvia with those countries instead? Plus, bearing in mind that the population of Moscow alone is almost 6 times that of the whole of Latvia, it’s hardly a reasonable comparison. But of course, it’s always easy to point out those who are ‘worse’ than you – and it’s just an added bonus if they happen to be Russian.

In 2006, nearly a quarter of all traffic accidents in Ireland were caused by immigrants. In an article in The Guardian from that year, Nick Miller, a Fine Gael spokesman said, “Nearly a quarter of all road traffic fatalities involved immigrants. That is partially because they drive on the wrong side of the road and partially because they have a devil-may-care attitude to drink driving. They believe, wrongly, they will not be caught here. We have called for road signs to be put up in Latvian, Russian and Polish to get the message across.” (I couldn’t find any more recent information but if anyone has any links, please post them in the comments.)

So, in a country where people are disappearing overseas all the time (and taking their crappy driving skills with them), it’d be nice if Latvian drivers stopped trying to wipe out the remaining population.

(And now I sit back and wait to be told I’m living in a parallel universe – again.)

137 Responses to It drives me crazy