If you can’t beat ’em, ROARRR!

I had planned on this being the last ever post on Expat Eye on Latvia, but I’ve never been known for my restraint. Call it a case of premature publication, if you will.

When my friend Lāsma (which definitely doesn’t rhyme with ‘plasma’) announced that she was coming to town, I knew what we had to do. Yes, it was time to go on the hunt for leopard print – after all, who better to accompany me than a Latvian chick?

We arranged to meet at Galerija Centrs at 4pm on Saturday. All morning, Lāsma had been sending me pictures of random monstrosities she had spotted – I got the feeling that she was enjoying all of this a little too much, but it was too late to back out then. 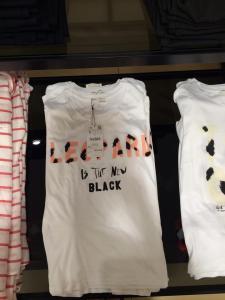 We walked into Galerija Centrs and hit the first shop we came to – H&M. I really didn’t want this to take long as I hate shopping about as much as I love drinking and talking, so I wanted to get the boring part over with as quickly as possible. Luckily for me, H&M didn’t disappoint.

I decided to start off small, and work my way up to the grand finale.

What’s new pussycat, yo yo…

Naturally, it was all downhill from there. Spying a pair of leopard print stilettos, I picked them up and went to find a dress that would do them justice. I found it in the form of a leopard print second skin that made me wish I’d been doing my ab workouts a little more religiously.

I made my way to the changing room, a grinning Lāsma by my side. Unfortunately, the shop assistant wouldn’t let me take the shoes in with me, but like a boy scout, I was prepared, having stuffed a pair of heels into my handbag before I left home. OK, maybe not quite like a boy scout.

I emerged from the changing room. Poor Lāsma was a bit overwhelmed by how stunningly stylish and sexy I looked, and almost dropped my camera in her excitement.

I gave her a slap and shouted “Get it together, woman!”. Not really – the dress was far too tight to allow for much movement or lung expansion. After waving some smelling salts under her nose, she finally got it together enough to take a proper photo. Are you ready for this? Let’s hope so. I won’t be responsible for any heart attacks that happen as a result of my insane sexiness… 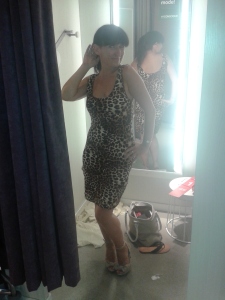 Apologies to the staff at H&M for running around your shop, giggling and taking photos with no intention of actually buying anything. But if anyone’s interested, this dress is a steal at just €9.95.

Adjusting to life in Germany, after living in Latvia for four years. Should be easy, right?
View all posts by BerLinda →
This entry was posted in Fashion, Humor, Humour, Latvia, Latvian women and tagged beer, Galerija Centrs, H&M, Latvian names, Leopard print, shopping. Bookmark the permalink.