For the love of Latvian men

The other day, I received an interesting message. It was from a Scandinavian girl wondering what it’s like to date a Latvian man. Now, I get messages all the time from men asking about Latvian women. These conversations generally go like this.

Sucker: I’ve met the most…

Sucker: But she’s so…

Sucker: But shouldn’t I just…

But this message actually made me think, as my feelings about Latvian men are really quite conflicted. As far as my personal experience goes, I’ve run the gamut. My first Latvian love interest was a raging alcoholic. We had a volatile on-again-off-again ‘relationship’ for a couple of months, the high point of which was him calling me and telling me to look out my window. (We lived opposite each other.)

Me: Are you naked?

Me: Is that a pineapple?

Me: Why are you dancing around with it?

Me: Oh. Well, just be careful if you’re chopping it up later.

While I knew there was a great guy in there somewhere, he just wasn’t confident enough to believe it. We didn’t last.

Most recently, there was Yummy Jānis – sweet, kind, affectionate, funny, smart – and a dream in the kitchen. Unfortunately, the timing was off but I’m sure he’ll make some girl very happy some day.

Latvian men, in general, have an odious reputation. And sadly, in a lot of cases, they’ve earned it. They’re lazy, they’re cheaters, they’re alcoholics. In an article from The Baltic Times, Latvian men are described thus: “Local men do not want to work or to help with housework. Women can rely only on themselves, and mostly they make all the decisions themselves, even if it is connected with some men’s work.”

Did anyone ever stop to think that maybe, just maybe, the emasculating, ball-busting women in this country should shoulder some of the blame? OK, so people like to blame it on ‘history’, and perhaps some of it can be. But think about it – why is a guy in his early thirties cheating on his wife? Is it because of something that befell his grandparents or is it because he gets roughly the same amount of love and respect in his own home as the pet goldfish – possibly less. 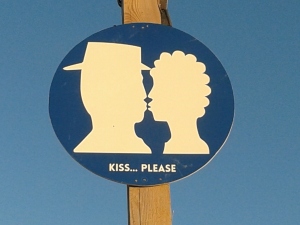 Don’t get me wrong, I’m all for strong women – I like to think I am one – I just think that it’s possible to be a strong woman without castrating every man that crosses your path.

Here’s what the Latvian Institute has to say on the matter:

Women play an especially important role in Latvian society. In the family, it is the woman who binds the family together and passes on family traditions. In Latvia today, women have assumed leading roles in society, among other things the previous state president was a woman. Latvian men, however, take pride in the fact that Latvian women are not only smart and caring, but also extremely beautiful.

Correct me if I’m wrong, but that doesn’t sound like much of a life, does it?

Jānis: Hey honey, I think I’m done admiring you for the day. Is there anything else I can do?

Laimdota: Oh, what’s the point. You’re useless. You never do anything right.

But don’t assume that because you’re useless, you’ll be allowed to roam freely. Hell no. These women are controlling and possessive to the point of insanity. 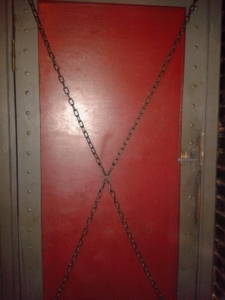 I promise to obey, obey and OBEY you ’til death do us part.

Grown men are actually ‘not allowed’ to do stuff here. Or if they are, there’s a good chance they’ll either be stalked or receive so many calls and texts that they’ll decide it wasn’t really worth going out in the first place. One friend of mine used to call his wife ‘The Eye of Sauron’ – but that was back when he had a sense of humour, before the nervous breakdown…

And if you’re thinking that Latvian men are a bit weak and pathetic for putting up with this, fear not – I know plenty of foreign men that have married Latvian ‘beauties’ and ended up drooling husks of their former selves. In my bleaker moments, I’ve considered setting up a National Society for the Prevention of Cruelty to Husbands, but then, they probably wouldn’t be let out of the house to attend meetings.

I’ve even got a uniform picked out.

The problem with Latvian women, if I may be so bold, is that they believe their own hype – this ridiculous notion that, somehow, they are god’s gift to men. So what, because you know how to slap on an inch of make-up and a short skirt it gives you the right to treat men like crap? Wake up. I’ve been observing the dynamic between couples here over the last couple of days (more closely than usual). The women, in 98% of cases, look bored and sulky. Profferred flowers and trinkets are met with a self-satisfied smirk rather than an appreciative grin. Why any man would bother is beyond me.

I don’t think Latvian men, any more than any other nationality, get married with the intention of someday becoming cheating alcoholics. Think of that sweet-faced young boy who gave you flowers when you first started dating; blushing, shuffling, and looking at you like you were the most beautiful creature he’d ever seen. Look at him now. Something must have happened along the way. And maybe you, Latvian woman, should take a good look in the mirror – you definitely know where it is – before judging the men in this country. In fact, perhaps the reason Latvian men die younger is simply because they want to. They’ve run out of other excuses to get out of the house and this is their last stand…

But back to the original question – should you date a Latvian man? I don’t know. But if you do, treat him the way you’d like to be treated. He may surprise you.

173 Responses to For the love of Latvian men